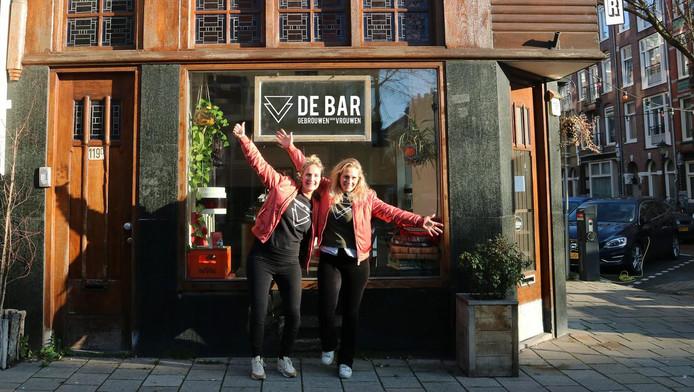 The sisters Do and Tessel de Heij from Gebrouwen door Vrouwen are doing well. Their beers are sold throughout the Netherlands and even in China. So it’s high time for a private bar.

With a crowdfunding campaign they can make their dream come true. The location is fixed: Brewed by Women will be on the site of Café Frieda in the Jan Pieter Heijestraat.

“We have been looking for a good location for about a year and a half,” says Do de Heij. “But it wasn’t that easy. We wanted to be on a corner with a terrace. Because you must of course be able to drink our beer in the sun.”

Via, via, the sisters got the golden tip about Café Frieda. Although a lot still needs to be done to make the building its own. “It’s really going to be very different. The construction is good, but there is a new bar with twelve taps on the wall, craft-beer style. There will also be an aquarium, where fish swim around our beer bottles.”

In addition to Gebrouwen door Vrouwen ‘own beer, they will also serve a changing selection of beers from other brewers. Such as an IPA, sour ale and a double, beers that they do not (yet) have in their range.

The crowdfunding promotion is going steadily. The first target amount of 100,000 euros is in sight, which they can use it to renovate anyway. If the 200k mark is achieved, then there is more money for “crazy gadgets”.

The sisters hope to be able to open March 1. “That’s pretty fast, but now we have to,” laughs de Heij. “We have already told everyone.”